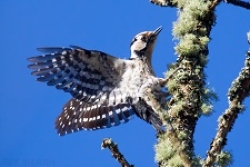 Our Newsletter review of the 2021 Lesser Spot nesting season is now available. Download or read the full 2021 Report . We are pleased that 19 nests were monitored and reported to us. Woodpecker Network has now monitored 95 Lesser Spot nests since we started in 2015.

Huge thanks to all of you who found and monitored nests this year and to those who searched in vain. The report also highlights some of your experiences, photographs and data collected.

Covid restrictions were much less severe in 2021 which meant that observers could get out into the field early in the season to locate their pairs. Unfortunately, the weather intervened making the pairs slow to settle on their nest site and many early cavity excavations came to nothing. This was very frustrating for the observers given the challenge of finding excavating birds in the first place. Some observers experiences are highlighted in our report.

There was a cold spell of weather in early February but things warmed through March. However cold weather returned in early April and it was well into May before things warmed up again. This led to a late and disrupted nesting season for most birds including the Lesser Spots.

This early cold weather meant that there were many cases of apparently complete and newly excavated nesting cavities being abandoned. We think in most cases the birds made a new cavity. As far as we could tell these were not cases of takeovers by other species, rather the Lesser Spots made a new cavity and delayed their nesting. Mat Shore monitored his birds in Norfolk very closely and in one case the pair excavated at least two cavities before settling on a third one where they eventually bred (see Mat’s nest diary in the full report).

We also had many examples of birds making a good cavity which was not used with the birds presumably moving to another nearby nest site, see photo. This nest in Alder was found in late April and checked on 6th and 18th May but not used.

All this activity meant that overall, there were more late nests than normal this year. Although some pairs managed to lay their first eggs around the normal date of 25th April there were many around 5-10 May. It is difficult to be certain, but we think an unusually high number of nests failed at the egg stage this year. We recorded three failures during incubation which is unusual.

One of these failed nests was opened up by a Great Spotted Woodpecker but for the other two the behaviour of the birds showed they were incubating eggs and activity ceased before the eggs could have hatched. It is possible that these early failing birds made another nesting attempt but we cannot be sure.

Two healthy male LSW chicks in the nestAs usual the nest success during chick rearing was good with only one observed failure but the average number of surviving chicks in successful nests was only 2.3. Assuming the birds that failed during incubation did not relay this gives an overall average of 1.6 young per nest. This is the second lowest output we have recorded since our study started in 2015. The photo shows two healthy chicks, nearly ready to fledge.

With this low level of productivity, the prospects for the species remain poor. Without good data on the survival of British adults and young it is difficult to be precise but a figure of at least 2.0 to 2.5 young per nest to arrest the decline seems reasonable.

Before 1980 the average number of young fledged per nest was 3.3. Since 2000 studies by Woodpecker Network volunteers and others recorded an average of only 2.5 chicks fledged per nest. See the report for more details. (Smith and Smith 2020 Bird Study).

Our results have already shown that Lesser Spots suffer from brood reduction, often immediately after hatching. At one of Mat Shore’s sites the Lesser Spot nest had two chicks whilst the Great Spot nest only 40 metres away had six young. Availability of food is critical. Again, this year observers recorded detailed notes on the timing, quantity and variety of food items brought to the nest to feed the young. We can also use photographs to analyse the prey species. Aphids are important particularly later in the season when the caterpillars are over, as well as snails and spiders. Thanks to everyone who has submitted information so far, we hope to pursue this more in coming years.

Some of the highlights from 2021 nests and the volunteers who found them feature in the full 2021 Newsletter report. All the sightings and records of nests monitored give important data to understand these enigmatic birds and help with their conservation. Thanks everyone who helped - same again in 2022 please.