How many Lesser Spotted Woodpeckers are there in Britain? 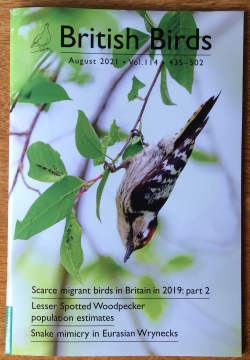 Woodpecker Network volunteers, Ken Smith, Linda Smith and Rob Clements, have made a new estimate of the numbers of Lesser Spotted Woodpeckers in England and Wales in the journal British Birds. And the answer is ....

Abstract
In recent decades, the Lesser Spotted Woodpecker Dryobates minor has declined in both population and range in Britain. It is difficult to monitor, occurring at such low density in many areas that it is rarely encountered during BTO/JNCC/RSPB Breeding Bird Surveys. Additionally, it can be difficult to detect and often occurs in locations and habitats infrequently visited by birdwatchers. 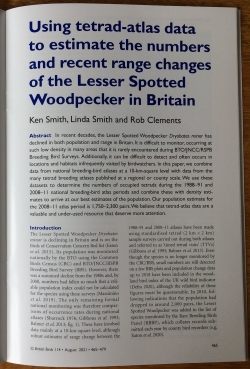 In this paper, we combine data from national breeding-bird atlases at a 10-km-square level with data from the many tetrad breeding atlases published at a regional or county scale. We use these datasets to determine the numbers of occupied tetrads during the 1988–91 and 2008–11 national breeding-bird atlas periods and combine these with density estimates to arrive at our best estimates of the population.

We believe that tetrad-atlas data are a valuable and under-used resource that deserve more attention.