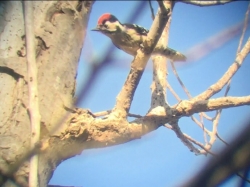 Detailed observations of a pair of Lesser Spotted Woodpeckers throughout the year has revealed new insights into the problems they face.

LesserSpot Network volunteers, Mat and Ricky, are monitoring a pair of Lesser Spotted Woodpeckers in East Anglia that have nested in the area for at least two years. They have been following the pair through the winter.

On 23 March, Mat found the male LSW excavating a new nest hole. The pair’s 2018 nest hole had been opened by squirrels and/or Great Spotted Woodpeckers over the winter. The female was also present but not contributing to the work. During the watch Mat saw the LSW’s work briefly interrupted by a Great Spot. The male LSW continued to work on the hole over the next week. 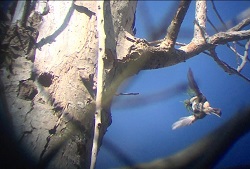 MarshTit flying in with nesting materialOn 5 April, Ricky visited to check progress:
‘So, an eventful visit this morning to the Glade. I expected to see our male LSW at final stages of hole completion, but problem is .......... Marsh Tits have taken over!!!’
‘I watched the Marsh Tits going to and fro with nest materials, while I waited for the LSW to arrive at hole. Eventually the male arrived 8.50, about the usual time we have had him at hole starting to chop away in mornings. He arrived at hole edge and went to go in but quickly reversed out! ‘
I heard alarm calling from inside from the Marsh Tit and then watched the male LSW for a long 4 minutes trying to get the Marsh Tit to come out, but it stayed put! The male LSW looked to be have a "beak fight" at the entrance hole the whole time I watched. I managed to film some of it. It was epic to watch!’
Watch the 'hole' drama on Ricky's video.

Note how the LSW's body stance changes half way through video, becomming erect and stiff due to being obviously alarmed and distressed by situation. This is typical woodpecker behaviour.

The Lesser Spots did abandon that nest hole. The latest news is the pair were seen together excavating a new hole on 11 April, but the downside is that the episode will have set them back both in time and resources for their breeding this year.

Ken, who has been watching breeding woodpeckers for 40 years, said:
‘Amazing observations. I've never seen Marsh Tit take-overs before. There is lots of evidence of Great Spots taking over or destroying LSW cavities. Woodpeckers do seem to be whimps when it comes to defending their nest holes. Even Great Spots give up if a Starling leaves so much as a piece of grass in their nest cavity. I think the LSW will probably move to a new hole, there is still time.’

Since first posting we have had further information from Richard Broughton, a Marsh Tit expert who studies them in England and Poland. He said: 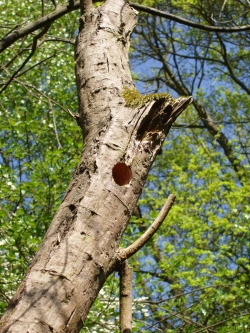 'I once recorded Marsh Tit taking over LSW hole in Monks Wood National Nature Reserve in Cambridgeshire, but never saw the fight. But it's a risky tactic for the Marsh Tits, as deadwood nests are very vulnerable to Great Spotted Woodpecker predation at the chick stage - which is what duly happened to mine!
The hole had been newly excavated, as there were chips on the ground, and was 2.5m high in a dogwood. The Marsh Tit laid its first egg on 13 April. A GSW opened nest and ate the feathered Marsh Tit chicks on 11 & 12 May, see photo. Karma?!'
Reference: R Broughton et al, Bird Study, volume 58, 2011, ‘Nest-sites, breeding failure, and causes of non-breeding in a population of British Marsh Tits Poecile palustris’, and can be read online https://www.tandfonline.com/doi/abs/10.1080/00063657.2011.582641

If you know of Lesser Spots breeding please get in touch so your information on the birds can contribute to Lesser Spot Network.

Thanks to Jonothan T for the additional photo of the male LSW.