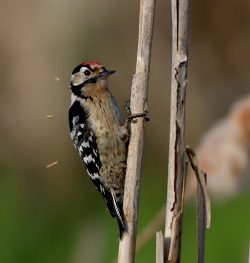 This new paper by Ken Smith and Linda Smith published online in the BTO journal Bird Study on 1st July 2020, analyses nest record data for the last 70 years and shows that Lesser Spotted Woodpeckers really are in trouble in Britain.

Ken and Linda set up Woodpecker Network in 2015 to encourage the study of Lesser Spots to try to find out why they are declining in Britain. Since then woodpecker network volunteers have found and recorded breeding outcomes from over 60 nests. This information put together with historical data from BTO nest records has enabled us to discover what is going on.

This is not the first study to identify low breeding success as an issue for Lesser Spots in Britain but what we have shown is the low productivity is now widespread with low numbers of young produced even from successful nests. This all comes down to the availability of food for the young.

If you do not subscribe to Bird Study, we have 100 copies of the full paper to give away, so, drop us an email and we will send you a copy.

There has been no trend in nest survival of Lesser Spotted Woodpecker Dryobates minor in the 70 years since the 1940s whereas the numbers of young per nesting attempt has declined. Late nests in any year are now significantly less productive than early ones.

To test whether there has been a long-term decline in the nest survival and productivity of the Lesser Spotted Woodpecker in Britain.

Breeding data from 331 nests over the period 1949–2019 have been analysed. There were three sources – nest records submitted to the British Trust for Ornithology, a study by the Royal Society for the Protection of Birds from 2006 to 2009 and records submitted to the Woodpecker Network from 2015 to 2019. Generalized linear models were used to analyse the records for first egg date, clutch size, numbers of young fledged, and numbers of nest days for which the nest was under observation. Data were grouped into three periods reflecting population trends of the bird (pre-1980, 1980–1999, 2000–2019) and we also analysed trends with year and spring temperature.

There was no trend in first egg date up to 1980 but subsequently it has advanced by 13 days.

The mean clutch was 5.3 with no trend with period or year.

There were no trends in nest survival during the egg stage or chick rearing.

The mean number of young fledged was 2.6, with nests since 1980 fledging lower numbers of young than those pre-1980 and a decline with year.

Loss of chicks, probably to starvation, was the main cause of low productivity. In the last period (2000–2019) nests started early in the season fledged more young than those started later, a trend not apparent in the earlier periods.

Low productivity is a widespread problem for the Lesser Spotted Woodpecker which has probably been exacerbated by the trend towards warm springs.

We especially wish to thank all the observers who have responded to the Woodpecker Network and LesserSpotNet appeal over the last few years increasing the numbers of nests recorded by 62 since 2015. 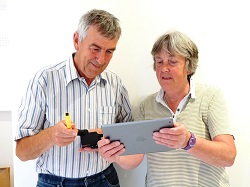 We wish to thank all the recorders who have submitted their observations to the BTO Nest Records Scheme over the last 70 years. Carl Barimore extracted the BTO nest record data and Liz Charman and Paul Bellamy helped with the data from the RSPB studies.