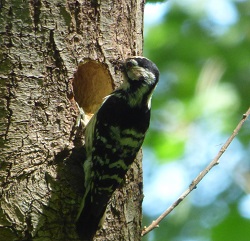 We are pleased to report that Woodpecker Network volunteers found and observed the outcomes of 12 nests this year.
This is despite the COVID 19 strict ‘lockdown being imposed on 23 March, just when everyone was poised to go out looking for breeding Lesser Spot pairs.
The lockdown was eased just in time for a few nests to be found and watched.

Huge thanks to all Lesser Spot Net volunteers who went out searching for nests and sent in details. 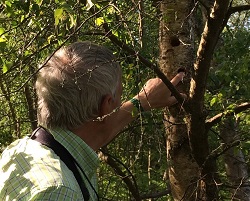 Predated Lesser Spot nest in a small Birch tree (top hole), Ken is pointing out how the Great Spot excavated a new opening lower down, to drag out the chicks from the nest cavity. Photos Linda Smith

Some young fledged successfully from all the other nests. Where the outcomes are known, six nests had two young, three nests had three young and one nest had only one young. 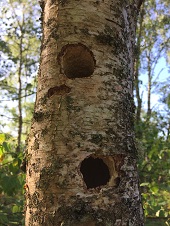 At one site a fledgling was found dead under the nest tree.

There was drama at one nest in a large garden when the adult male was killed by a neighbour’s cat whilst foraging near the ground. Fortunately, the female was still around and continued feeding the young which fledged successfully.

Defoliating caterpillars, the main food supply, for woodland birds, peaked very early this year, due to the very warm weather in April. So by the time Lesser Spots were ready to feed their young the main peak of caterpillars had passed, leaving the adults to search for alternative food. This could be why the numbers of chicks fledged was low.

Over the winter, we will compile a full report with analysis, photos and videos from the nests and other sightings from 2020 and comparison with previous years.The report will be published on this website as soon as it has been completed and checked with the nest observers.

If anyone knows of any more Lesser Spot nests please send the details to contribute to the project to Ken and Linda Smith via the Woodpecker Network website.