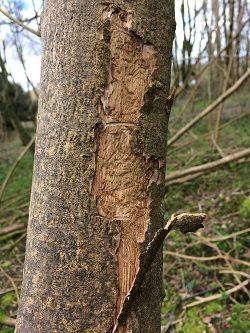 Dead wood beetles and their larvae are an important source of food for woodpeckers. Will dead Ash trees boost the supply of beetles?

We have been wondering whether the death of Ash trees as a result of Chalara Ash decline (Hymenoscyphus fraxineus) will result in a similar pulse of dead wood invertebrates to the benefit of woodpeckers. 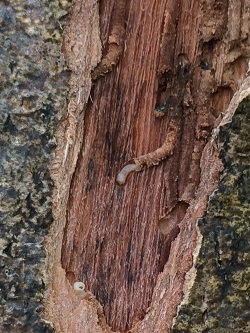 Close up of woodpecker damage on Ash tree with loose bark pulled back to show two beetle larvae.Apart from one instance of a Lesser Spotted Woodpecker feeding on a dead Ash in the New Forest last year, we have had very little evidence of Lesser Spots or Great Spots feeding on dead wood on Ash trees. That is until a couple of weeks ago when we noticed dead Ash stems in the South Downs in West Sussex had been attacked by Great Spotted Woodpeckers, we even watched one doing it. They are clearly feeding on beetle larvae, probably the Ash bark beetle (Hylesinus various), see our photos.

Ash dieback is very prevalent in the South Downs in West Sussex and has been present for a few years now. We assume that it has taken this long for bark beetles to find the dead Ash, to lay their eggs and for the larvae to develop. The Great Spots seem to have cottoned on.

Will Lesser Spotted Woodpecker do something similar and find the new food supply in dead Ash? We think they will but whether this leads to a resurgence in the population remains to be seen.

Please send any information to Ken and Linda Smith via this website or directly to This email address is being protected from spambots. You need JavaScript enabled to view it.