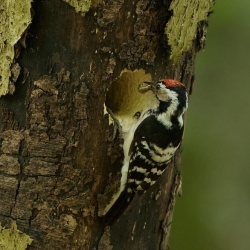 Our report on Lesser Spotted Woodpecker nest recording in 2018 is now available on this website, 2018 October Newsletter with details of all the nests found, fledging success and lots of photos and further information.
Thank you to everyone who contributed to the success of the project this year.

Lesser Spots remain a very challenging species. We received reports of territorial birds or pairs from 85 sites this year but despite big efforts by ourselves and some other especially dedicated observers, only ten nests were found and monitored in Cheshire, Devon, Herefordshire, Norfolk, Nottinghamshire, West Glamorgan and the New Forest (4 nests). In addition, at two other sites, one in the New Forest and one in East Sussex, young recently out of the nest and still being fed by the adults were found although the nests were never located. 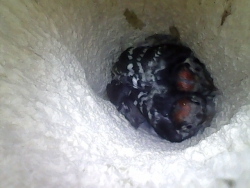 We now have four nest inspection camera systems available which we have been able to loan to local observers. Using these cameras, we are able to record clutch size for those nests found early enough in the nesting cycle and the numbers of chicks fledged from most nests – information vital to help understand the reasons for the decline of the Lesser Spotted Woodpeckers.

Details of the nests and numbers of chicks fledged are in the newsletter together with lots of photos, like this one of the two male chicks in New Forest nest (4) taken with the nest inspection camera on 19 June.

The overall success was good with no failures recorded in the nests we monitored and an average of 2.9 young fledged per nest. The main feature of the 2018 season was its lateness. Most young did not fledge until mid-June which is about 10-14 days later than usual. It seems that the cold spell in early spring delayed the start of nesting for most pairs.

We plan to continue the project in 2019, so please keep in touch and look out for Lesser Spots over the Winter.