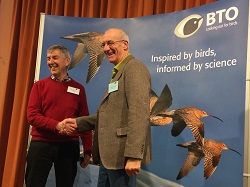 It was a huge honour for Ken Smith to be awarded the BTO Tucker Medal at the British Trust for Ornithology annual conference on 9 December 2017.

The Tucker Medal was awarded to Ken in recognition of his outstanding service to the Trust and the wider cause of ornithology.

Since first becoming a BTO member and volunteer in 1974, Ken has served on the BTO Scientific Advisory Committee and on Ringing Committee, twice, from 1985- 1989 as an appointed member and from 2011-2016 as Chair, making a huge contribution to both. Ken worked in Conservation Science at the RSPB on many endagered species such as Bittern and Northern Bald Ibis from 1981 until his retirement in 2006. Ken is also a leading expert on woodpeckers and the largest contributor to the BTO Nest Records Scheme for Great Spotted and Lesser Spotted Woodpeckers.