The results of the Lesser Spot nest recording project this year are now available in our 2017 report.
This is the third year of the initiative and the most successful yet with 13 nests monitored.
We have had support this year from more volunteers searching for and finding nests and the birds have had a pretty good breeding season too.

We received reports of birds or pairs in the breeding season from 85 sites.
However, despite considerable efforts by all the observers, nest excavations were reported at just 20 of these sites.
Not all the excavations resulted in nests with eggs or young but our final tally was 13 ‘active’ nests.
There were only two known failures and at least 26 chicks fledged. Details from all the nests are in the 2017 report.
This compares with ten nests reported in 2015 and five in 2016.
This year we bought an extra nest inspection camera, so we had four available and loaned them to volunteers in Devon, Gloucestershire and Cheshire.
The nest inspection only takes a few minutes and enables us to record the number of eggs and chicks and their progress. 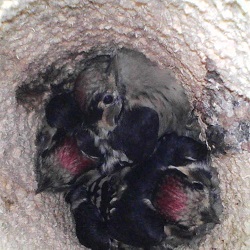 Three male chicks with red heads in Kent(1) nest on 25 May, photo by Ken & Linda Smith.

In addition to the nests with eggs or young, we received reports of birds excavating cavities at a further seven sites but with no evidence that eggs were ever laid. 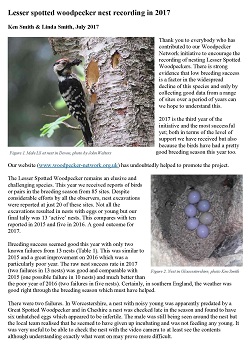 Front page of the 2017 Lesser Spot nest recording reportTo read and download the full report Lesser Spotted Woodpecker nest recording in 2017, click here.
Our report includes details of all the nests found and analysis and discussion of the results.
Thanks again to everyone who helped, see the acknowledgements in the report.
We plan to run the initiative again next year and hope even more people will get involved. As more and more observers get to know their local Lesser Spots, we hope that more nests will be monitored. It is clear, even from our data over the last three years, that there is considerable annual variation in breeding success so there is no substitute for collecting more data over more years and more sites.
Ken and Linda Smith – our contact details are in the newsletter - do get in touch.