Study of Lesser Spots in Lincoln 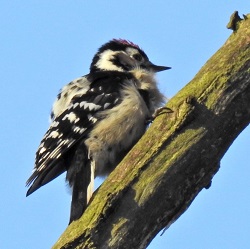 Andy Sims detailed study of breeding Lesser Spotted Woodpeckers in Swanpool Lincoln in 2015 and 2016 has been published in the Lincolnshire Bird Report 2015, link to the full report This is a great story -

Andy describes how in March 2015 he found the male Lesser Spot excavating in in a dead Horse Chestnut tree. He followed the activity at the nest and watched the young fledge on 1st June.
In 2016 birds nested in the same tree and fledged young successfully, but something befell the female as after the eggs had been laid only the male was seen.
In 2017 the male was again present at the nest tree and excavated a new nest hole. It drummed every day from March to May but Andy never saw a female.
Read the full article here
We are grateful to Lincolnshire Bird Club for permission to reproduce the article from Lincolnshire Bird Report 2015. Copies are available from Lincolnshire Bird Club see their website www.lincsbirdclub.co.uk