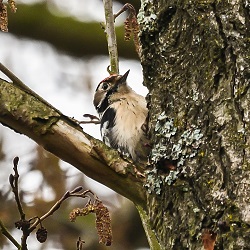 It has been a great two weeks for finding Lesser Spotted Woodpeckers. The weather has been reasonably calm and warm (at least in the south) and, for Lesser Spots, the birds have been drumming and calling reliably. 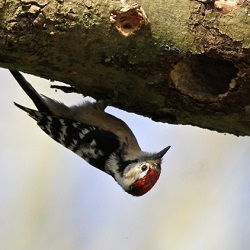 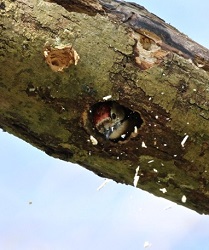 So far, we have received reports of drumming and displaying birds from 26 sites in 15 English counties. Thanks everyone who has sent in sightings and information.

Although it will be a few weeks before birds lay eggs they have already started excavating nesting cavities. 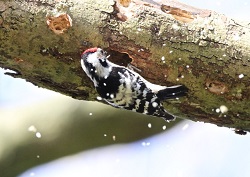 We have had reports of Lesser Spots excavating cavities at three sites already but we are sure more will be discovered over the next couple of weeks.

Simon West took this series of photos of an excavating male in Hertfordshire on 15 March.

The New Forest remains a stronghold for the species and Rob Clements and Marcus Ward are finding drumming and calling birds to be widely distributed. It will be a while before we know how many nesting territories this will turn out to be and it will be interesting how many nests are eventually found. Linda and I spent the morning in the Forest with Rob last week and in a shortish walk came across what were probably five different drumming birds. Nowhere else that I know off in southern England has such high numbers of birds distributed over such a big area.

One of my tips for finding Lesser Spot nests is to first of all check out last year’s nest site. Not very helpful if it is your first year of course! 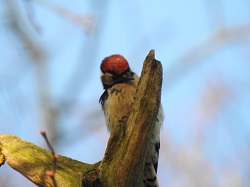 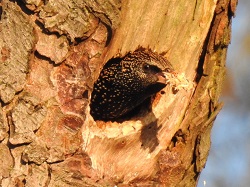 found his birds used exactly the same nesting cavity in 2015 and 2016 but this year a pair of Starlings have taken possession. It seems the hole had been opened out over the winter by Great Spotted Woodpecker or Grey Squirrel so wouldn’t have been used by Lesser Spots anyway. It is unusual to find starlings doing this nowadays. In the early 1980s, competition for nest sites with Starlings was a big problem for Great Spotted Woodpeckers but since the decline of the Starlings this has not been an issue for many decades.

Andy Sims photos of his drumming male on 7 March and a Starling in last year's LSW hole.

In Norfolk, storm Doris blew down last year’s nest tree so the team there will have to find the new nest from scratch again this year.

It is great that there is so much interest in Lesser Spotted Woodpeckers this year. But they are now a rare and difficult to see bird which can result in considerable bird watcher pressure at well-known sites. On our website, we always respect the wishes of the finders of the birds and don't usually publish site details. If birdwatchers follow the usual code of conduct for rare breeding birds (look on RBBP, RSPB and BTO websites) there should be no problems but we have received adverse comments about the overuse of playback at one site at least. There should be no need for this, it may be detrimental to the birds and it is certainly very annoying for other birdwatchers who find themselves chasing some playback calls rather than the real birds. Everybody needs to behave responsibly and not do anything that is likely to prejudice the breeding success of the birds - they are only there for you to see because they have bred successfully in previous years.

Please keep following your birds and look out for signs of nests. Having located a good number of birds we are very keen to know whether they actually nest and monitor their nesting success.

Just to emphasise the interest in Lesser Spots, over 50 people turned up for Rob Clements' walk in the New Forest last Saturday, they had good views of Lesser Spots calling and drumming and as a bonus some Hawfinches too.